The first survey conducted with the use of computer-aided statistical tools was the census made in 1890 in the USA. It was the 11th US census. The first one took place 100 years earlier, in 1970. The methods used were prepared by Herman Hollerith. The data was entered using punched cards and counted by the machine. 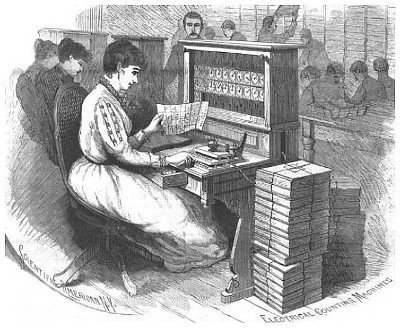 In 1911, the company founded by Hollerith was merged with 3 other companies, and as a result of the merger, a Computing-Tabulating-Recording Company (CTR) was formed. In 1924, the CTR has changed its name to International Business Machines (IBM).

In 1937 AMA (American Marketing Association) was founded, and 10 years later (in 1947) ESOMAR (The European Society for Opinion and Market Research) was founded.

Internet research began to develop very dynamically in the second half of the 90s. In 1995 dot-com boom has started (the bubble burst in 2001), on this wave in 1999, Ryan and Chris Finley in Madison, USA founded SurveyMonkey. Three years later (in 2002), Qualtrics is also established in the USA.

In 2003, the article by Frederick F. Reichheld "The One Number You Need to Grow" appeared in the Harvard Business Review. It is considered the birth date of the Net Promoter Score (NPS) methodology, which in the following years gained big popularity thanks to the usage of online surveys and very simple implementation.

In Poland, online surveys began to develop in the second half of 2000. SurveyLab was founded in 2009 and quickly gained recognition of both large and small companies. In 2017, SurveyLab provides the first mobile application (for Android and iOS) that allows you to collect data offline.

The area of online research is developing rapidly and is constantly replacing paper and telephone surveys. Yes. This is not a mistake. Paper surveys are still used by companies and research agencies. The selection of online surveys is determined by price, availability, and easiness of use. We predict that in the future more and more companies will implement Do-It-Yourself (DIY) platforms, also more and more projects will use BIG DATA and AI technologies. Especially in the area of data management and analysis.